HOW TO OPEN A LASER TAG ARENA

We want to share with you our experience of developing the businesses of our customers. We provide a range of services for the opening and further support of laser tag centers and today we will talk about one of the projects.
We were approached by partners from Lithuania who had purchased 12 GALAXY game sets. Linas and Marius own several restaurants and decided to start hosting laser tag games to offer visitors a new service.
We chose the laser tag business, because we needed a perfect format for birthday parties, and also because we have little kids ourselves.
(Marius)

We had developed a laser tag arena project based on the floor plan provided by our customers. In addition to this, we requested a photo and video of the site and also asked a number of clarifying questions.
Our team can make a 3D model of the arena based on any floor plan. But we always ask for additional information to make sure that the room is suitable for construction in case our partners have to look for another place. 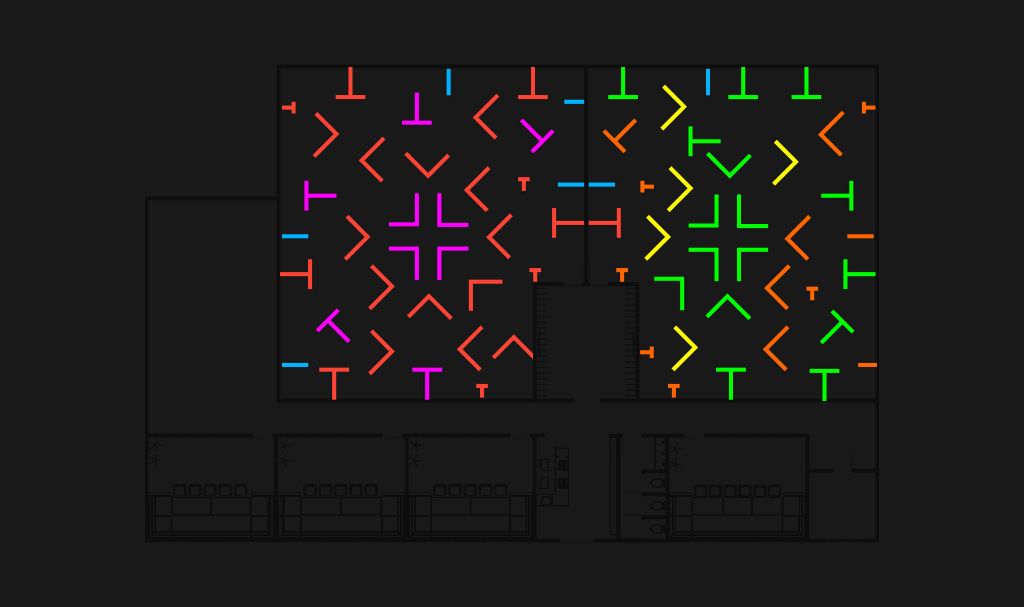 Initially, Linas and Marius wanted to use the entire space available of 700 m² for the game maze and reception. We offered to reduce the maze area by almost half, since they were only going to use 12 game sets.
The decision was made based on the optimal ratio, time-tested and proved by hundreds of satisfied customers – 10 m² per 1 person. In this case, the maze should be 120 m². But, factoring in that Linas and Marius plan to increase the number of equipment sets by 2 times, we chose a maze area of 540 m². Such a large size of the maze is also due to the fact that there are other laser tag centers in the city, and a 540 m² playing area will become their competitive advantage. 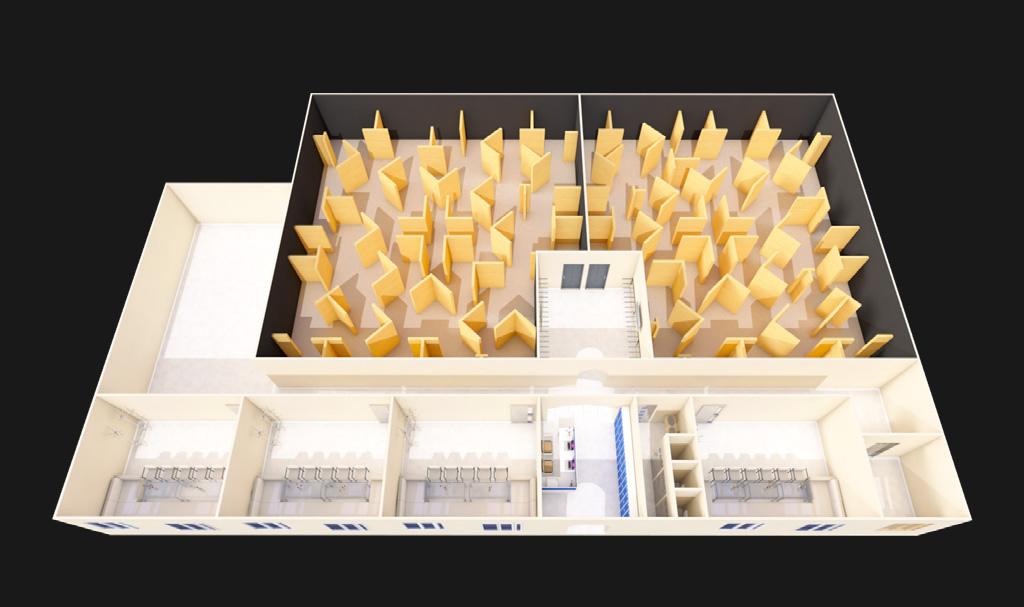 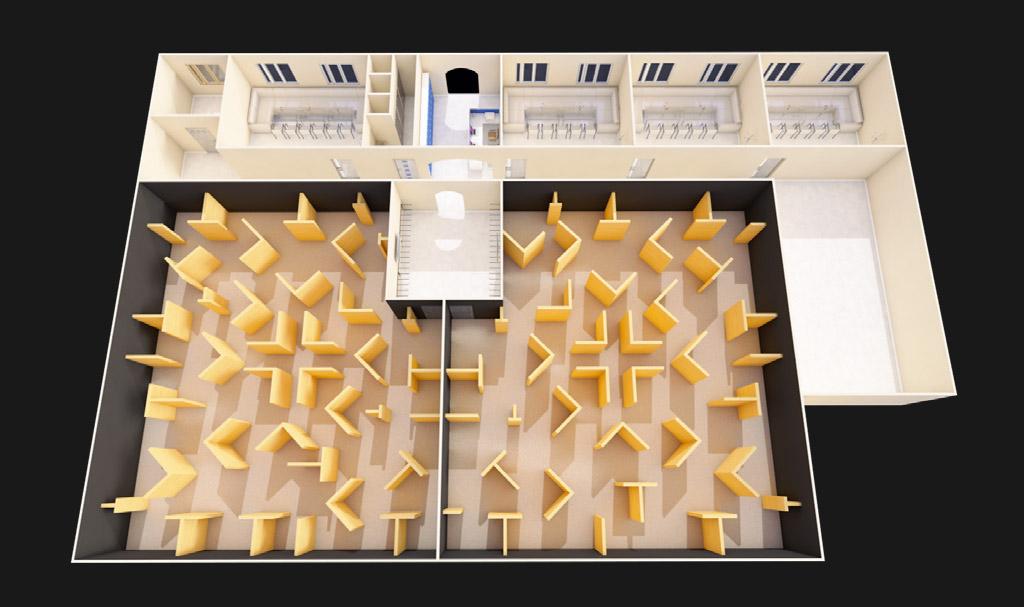 We zoned the entire room for the efficient use of unused space. This made it possible to create several zones for related services that could increase the average bill.

What is the result?

All the construction work was carried out by contractors hired by our partners. The deadline announced by the contractors was 8 weeks. We made a work schedule with segmentation into stages, which allowed us to reduce the construction time to 6 weeks. It was necessary to meet the deadline indicated by Linas and Marius, so we regularly kept in touch for consultation of the technical specialists.
The stages of construction:
We provided a calculation of the required amount of building materials, as well as their specification. This gave a clear understanding of what components were required, how many were needed and by what criteria to choose them. For example, we saved our partners money by warning them that for visual elements that would glow under ultraviolet light, fluorescent rather than fluorescent paints are all that was needed.

To develop the concept of the visual design, we brainstormed together with Linas and Marius. Having refused several versions, they chose a space theme, it gives the players a wow-effect and allows individuals to realize the most daring ideas of graphic designers.
After the customers approved the concept, our designers began to create individual components of the arena design. We have formed a bright futuristic style that would appeal to both adult players and children. In the process, we had to abandon some visual elements, which looked very impressive, though could scare the younger visitors of the arena.
When the concept design of the arena was ready, it was time to bring all the achievements to life. It was decided to involve our designers, and not look for third-party contractors. By the time of their arrival, the room should be prepared for applying images, all shelters and ultraviolet lamps are installed in the game labyrinth, and the walls are painted in a background color.
Unfortunately, the contractors did not have time to prepare the premises on time, because they had never built laser tag arenas before. In order not to get off schedule, we worked out a detailed algorithm of actions with them. Thanks to the productive communication, as well as the inventiveness of our artists, we still met the deadline.
In the process, we came up with an innovation for the background. We created a new technique for applying an image to speed up the workflow and enhance the effect.
(Anna, the Design Artist ) 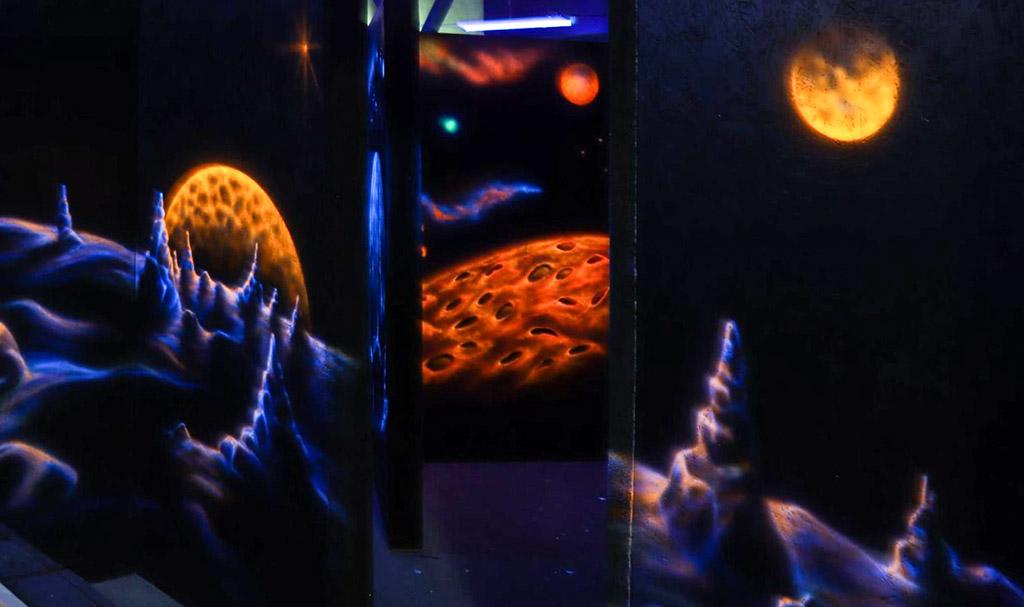 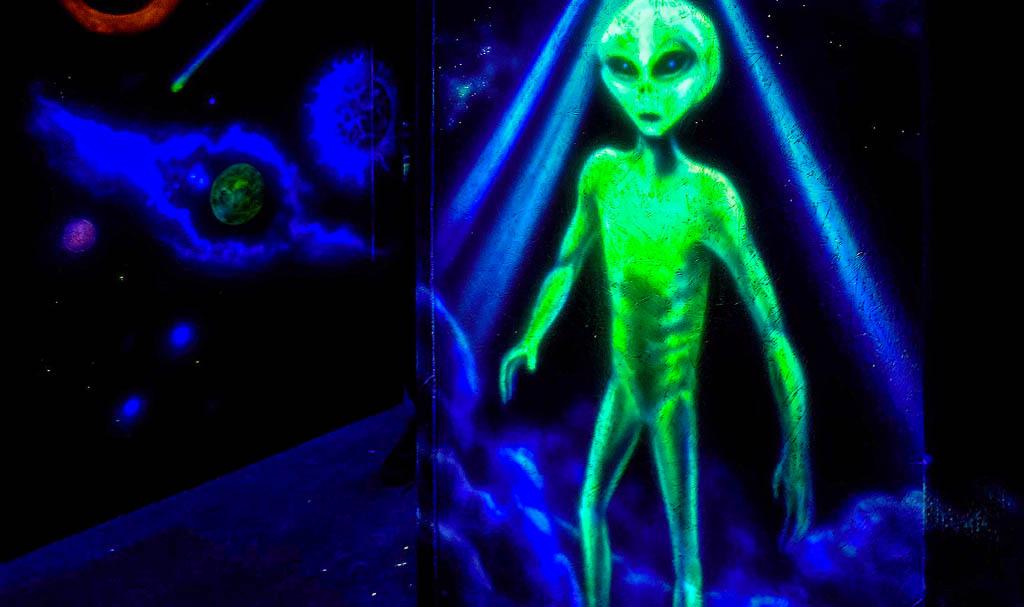 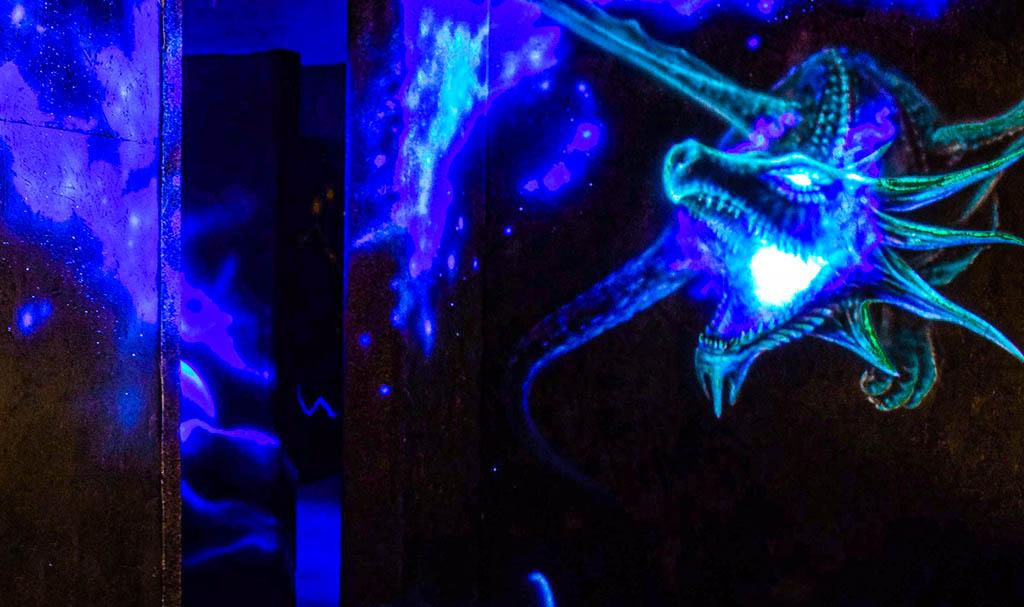 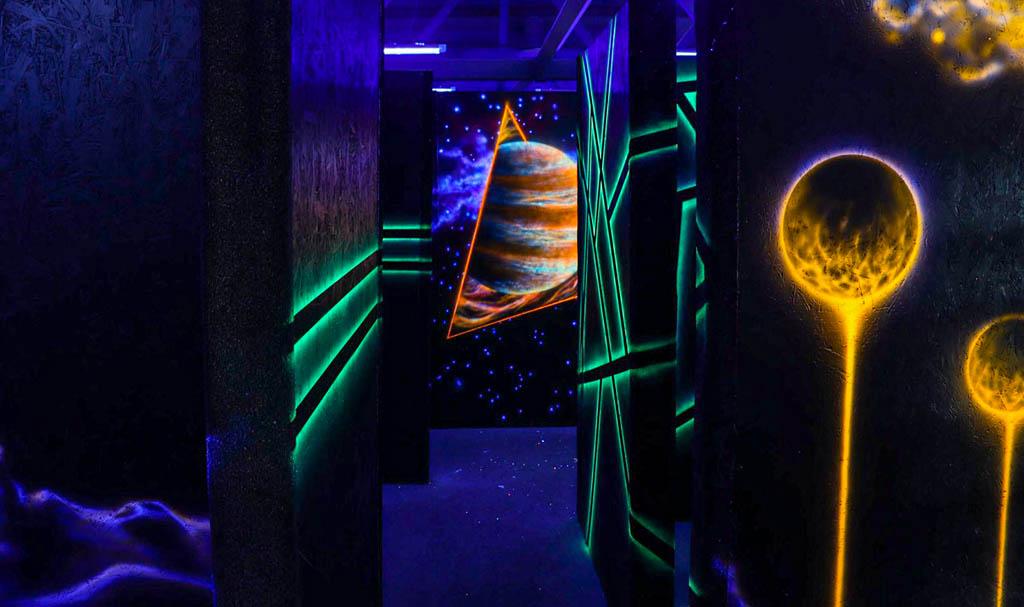 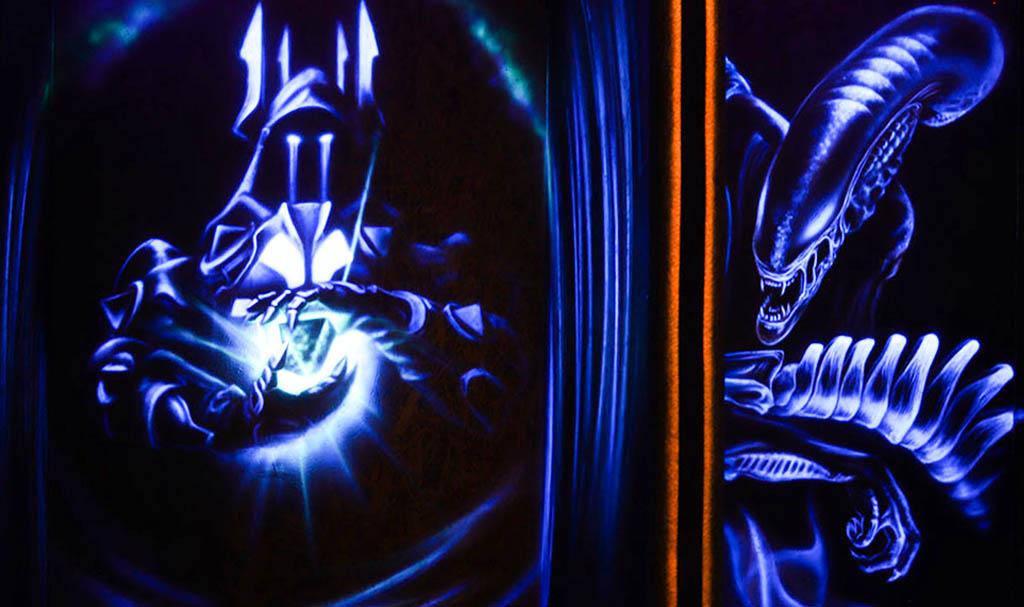 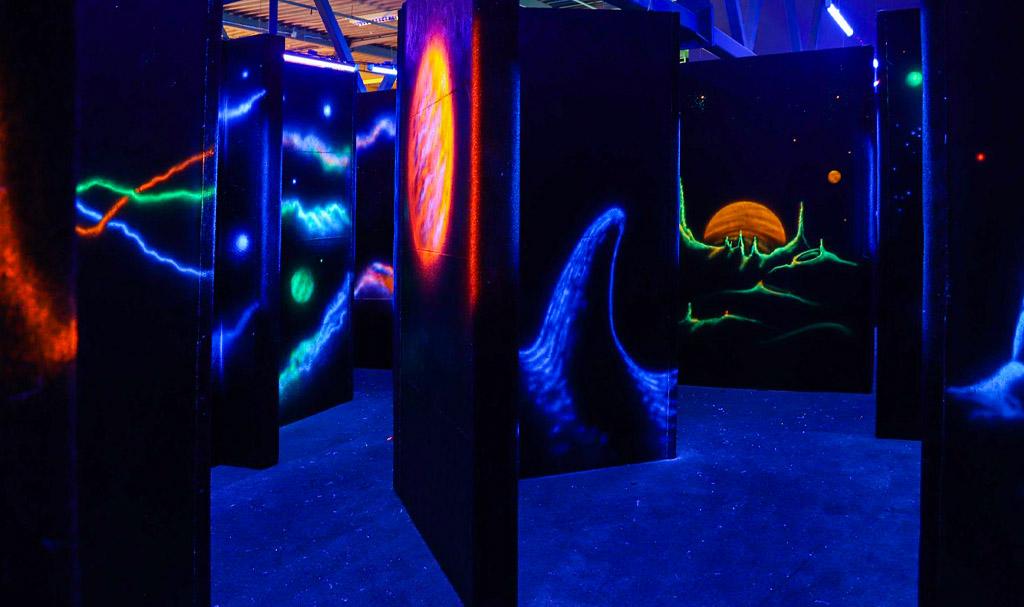 How were we useful?

We achieved our goals, we assisted in the construction of the arena, reducing the period of work by 2 weeks and created a concept design that satisfied all the wishes of our partners.
The budget that was planned for the construction of the arena was 40,000 €. Linas and Marius came to this amount based on their initial calculation, before consulting with our specialists.
After analyzing the initial data, we proposed to increase the budget to 60,000 €, so that the final result will meet all the expectations of the visitors of the arena. We suggested choosing high-quality building materials so that you wouldn’t have to make repairs in a few years, as well as creating additional zones of related services to increase gross profit.
At the end of all the construction work, we provided marketing support – ready-made templates and graphic layouts for effective online promotion, outdoor advertising and souvenir products. We also provided a package of business instructions and training materials on organizing games.
The opening date of the arena was October 12, 2019. Today, Linas and Marius plan to expand their gaming arsenal. Scaling is more than appropriate, as they are already filled with orders for games on weekdays and weekends, and the arena area allows this.
Do you like this project?
Find out what we can do for you!