NETRONIC VEST – A NEW GENERATION OF VESTS FOR LASER TAG

Many fans of the outdoor laser tag want to have more setting and realistic combat. A new generation of vests has implemented a number of important innovations designed: shoot through, differential damage and autonomous operation.
Following the lightest headband in the industry, we created the most lightweight, high-tech vest for outdoor laser tag. The basis was a new generation of electronics, which you could already appreciate in NETRONIC. Practical materials allow the vest to work properly after years of active use. Automated control makes it possible to conduct a greater number of gaming sessions in one day. 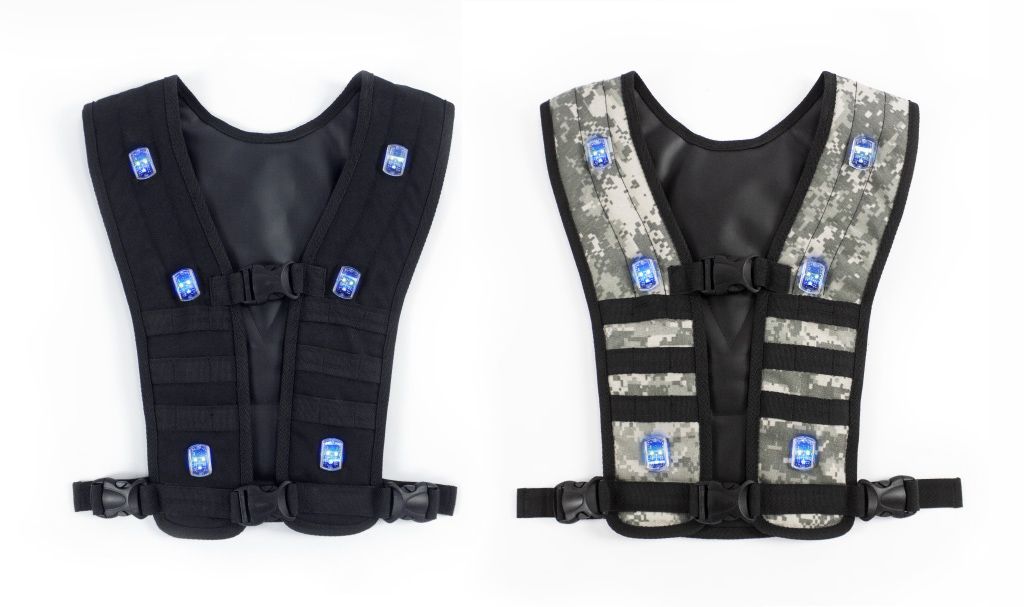 Now they work together

A vest and a headband may be used both – separately and together as well. Joint usage of these two devices will significantly increase the hit area and thus makes the game even more realistic. Laser tag clubs’ owners who already use NETRONIC-based equipment can purchase the vest or the headband to make the game more interesting.

NETRONIC vest is able to operate independently, without laser tag gun. The option “Game without laser tag gun” is available for two modes: Zombie and Doctor.
In Doctor mode he player puts on the vest using which he can every 5 seconds replenish 25 health points for all players located in 1-meter distance around him.
In Zombie mode with a help of the vest the player can immediately deactivate opponents. All the players who come 1-meter close to the zombie will be deactivated. Zombie can replenish his health points with radiation. To activate one of these two modes it is necessary to turn a vest on and disable a laser tag gun and then activate Zombie or Doctor mode by certain button on the remote control.

Separate processor in each sensor

In comparison with the previous version of the vest, the number of sensors was increased from 7 to 9. The dense placement allows you to get rid of blind spots when firing at close range.
To provide zoned vibration indication, each sensor is equipped with a separate microprocessor. As a result, the player senses the vibration of an individual sensor from the side where the shot came from. Such an imitation allows you to feel hit in the shoulder, stomach or back, which significantly increases the realism of the game.

The player will be able to track the hit in the opponent due to the light indication. The body of the new sensor has improved optical properties, due to which the bright light of the diodes is visible even in bright sunlight at a distance of up to 100 meters.

Sensors of new generation allowed to implement a new function – the function of differential damage. Due to this function you can set the number of health points that will be taken from the player if he was hit in chest, back or head (in case when you use vest and headband together).
Differential damage makes the game more realistic as each player will strive to cause more damage aiming at the certain zone.

This option will totally change the game and flip your image of laser tag game over. The shoot through function was implemented to increase the dynamic of laser tag battles. Having hit one opponent you will also hit the opponent who stands behind his back. Shoot through option makes players act more tactically and change their positions during the firing.
*the function may be disabled

Laser tag centers often play games in the dark, or in dimly lit rooms. Inverse mode is created to prevent injuries to players when playing in such conditions. Turning it on, the diodes will constantly glow with the color of the team, and when hit, they will briefly flash in white.

NETRONIC vest is not afraid of harsh rental conditions!

Each sensor is able to endure the weight of the car

he height of the sensor is only 6 mm, this form factor allows to withstand falls, drops and other dynamic loads. The body is made of polycarbonate, which is characterized by shockproof properties. Each sensor has two bumpers, it allows you to protect the sensor from scratches, go through frequent drops and friction on various surfaces. The reliable body allows the sensors to maintain their appearance and performance even in the harshest rental conditions.

Vest material CORDURA MAXI fabric, with a density of 1200 g / m.kv. It perfectly retains its shape, is easy to take care of, and also has a long resource of strength. The lining is made of a special material that repels moisture and also does not absorb odors. Between sessions of the game, it is enough to simply wipe the lining with a sponge.

Adjustable size – the vest fits everybody

he vest is perfect for children and adults, due to the adjustment straps, its size can be easily changed. During the game the vest does not constrain movement, and is also practically not felt on the body. The total weight is only 700 grams, this makes it the lightest in the industry.

Working with the NETRONIC vest is even easier!

The battery, charge indicator and other electronics are compactly installed in a small control unit. A full battery charge is enough for one game day. The body of the unit reliably protects the electronics from mechanical damage and also dust and moisture.

To turn the vest on and off, hold the tact button for 3 seconds. This solution helps prevent accidental disconnection during the game.

NETRONIC vest management is done using a single software. The connection between the rifle and the vest is supported wirelessly. NETRONIC platform functionality provides an option for remote power off, it significantly reduces the time for equipment maintenance, allowing you to spend more gaming sessions in one day.

Stay in the game

The NETRONIC vest has a beacon function. It works when the laser tag gun is being turned off with a loud beep. Thus, the instructor will be able to quickly find and solve the problem without stopping the game. At the end of the match, the function allows you to detect unconnected vests and prevent unauthorized loss of charge.
The NETRONIC vest perfectly copes with the harsh conditions of outside rental. Due to impact-resistant materials, it is able to maintain its appearance even after years of active use. 9 autonomous sensors create an angle of 360 degrees when firing at close range. Zoned imitation of shock will interest new visitors and will not let experienced players get bored.
Make games more realistic with the new NETRONIC laser tag vest.